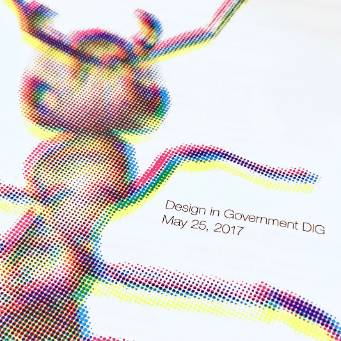 Design in Government Conference on May 25, 2017 at the National Endowment for the Arts

Design in Government is a group organized in 2009 by the Design Manager of the Internal Revenue Service, John Jacobin, which brings together designers from across the federal government on a semi-annual basis. This year, John pulled together DiG working groups with roughly 30 of us in April on four general topic areas: marketing in-house design services, strategic alignment of design, federal creative services standards, and federal visual design standards. We had a month to work in our groups on our own time and then came together at the Design in Government conference held on May 25, 2017, along with a number of other session presenters. The event was hosted by the National Endowment for the Arts and brought together over 300 federal creatives to learn from each other and continue the conversation about the role of design.

DiG is the spiritual successor to President Nixon’s Federal Design Improvement Program launched in 1972 which was a joint effort between the General Services Administration and the National Endowment for the Arts to aid other federal agencies in raising the quality of their architectural and visual design. From a visual standpoint, this program brought forth many of the initial federal brand identity standards including the Department of Labor, the Environmental Protection Agency, and NASA. Eight years later VA would introduce its first identity standards with the iconic stylized VA logo. Though DiG, we are reviving the focus on the importance of good design in order to enhance the experience of our citizen customers.

The government has forward-leaning thinkers in abundance. — Experience designers from Meiter and the [email protected] discussed the various customer experience design projects going on throughout the federal workplace and focused particularly on the work of the VA Center for Innovation, the VA’s Community Provider Toolkit, and the Veterans Journey Map project. Many other presenters throughout the day talked about the prevalence of design talent in pockets throughout the government as well. Julie Anixter, the executive director of AIGA, spoke on the nobility of work in government and that it is interdisciplinary, cross-sectional, and systematic design work which doesn’t occur in the private sector. Another example provided of the importance of design in government is that well considered PSA’s can make uncomfortable topics more approachable to the public.

Just don’t suck. — Jared Spool, formerly of the US Digital Service under President Obama, shared Noriaki Kano’s model of delight in user experience (shown below), which he introduced by stating “making a product usable is like making a meal edible.” In other words, usability should just be understood rather than a goal. The goal should be delighting the user. Kano argues that it is impossible to delight on basic expectations, we can only screw them up. Instead, we must exceed expectations through design by providing pleasure, simplifying flow, or imbuing meaning.

This is what makes much of government design difficult as the government does not set the basic expectations citizens hold, corporations do, and we must ever adapt to external changes in those expectations in order to deliver quality services. Jared also stressed that innovation isn’t about adding inventions, it is about adding value where it didn’t exist before to raise the quality of a citizen’s experience.

DiG Workgroups — Our four workgroups each presented 10-minute sessions to the whole conference and then hosted table discussions at lunch for attendees interested in each of the topics.

The Better Government Toolkit — Members of the Presidential Innovation Fellowship presented on the work they are doing in innovation labs with various federal agencies in order to improve the citizen experience with the U.S. government through design. They are working to put together a comprehensive toolkit for journey mapping citizen engagements throughout government. They also introduced an upcoming Design-A-Thon held by GSA in late June that will serve to continue development of the toolkit, establish a community of citizen experience design practitioners and a group of ambassadors for scaling design innovation in government.

Science of Design — Amira Boland spoke on GSA’s Office of Evaluation Sciences and the use of controlled experimental research to evaluate design solutions. She stressed the importance of understanding social norms and social science in the development of design work. She described the Office of Evaluation Services as working at the interplay of policy goals, individual behavior, and program touchpoints.

Innovate IRS — IRS’s Office of Online Services presented their experiences with crowdsourcing innovation and their upcoming mobile-first website redesign launching in August. Their current website is based on personas that were good in theory but haven’t proven to be useful for website visitors, and their homepage is currently a field of roughly 85 links that they described as “people in a room all screaming at you.” Their redesign instead takes a 90/10 approach that is based on tasks rather than personas. It has been simplified into 6 large links based on the most common tasks visitors seek and employs the use of mega menus to easily present additional, less common, content.

The First Question of Leadership — The last presentation of the day was from David Burney of New Kind creative agency. This session was less pragmatic and instead focused on inspiring the participants to continue advocating the importance of design in the federal government. Burney praised the work of both DiG and AIGA and stated that we as designers “have a duty to participate in any organization whose sole purpose is advancing our profession.” Designers need to step up from being polishers waiting to be told strategy and become intimately involved in the creation of strategy. As design leaders we need to act with authenticity; what we believe, say, and do need to be consistent and consciously evaluated to achieve alignment. We should seek to be mindful leaders: someone who embodies leadership presence by cultivating focus, clarity, curiosity, and compassion in the service of others.